The title-introtune starts fading in and you hear that something different is being played. The soundcolor is incredible, basically because the music routine handles seven channels. The tune is very moody and atmospheric and the quality is much above average. It lasts for about nine minutes with lots of variation, nice rhythms and nice melodies. Hippel got his very own style, using powerful drums and basslines.

The title-tune itself is good, but now he uses "only" four channels. If you have heard the "The Last Ninja" music from the C64, this tune is in many ways similar. The soundcolor is awesome here, too. His routine handles bassdrums and snaredrums within the bassline. Let's say you're mixing a bassdrum with a bassline in Protracker to spare a channel. It doesn't sound the same if you're playing the notes "A1" and "C3". You can hear the bassdrum is following the bass, and when a bassdrum sounds good at "C3", it doesn't sound good at "A1" (that's logic). Hippel has managed to do this without loosing the "beat" of the bassdrum. If he plays a "C3" note the bassdrum sounds good, and if he plays the note "A1" it still sounds good. In that way, in most of his tunes, he uses only one channel for the bass and the drums. Then he got one channel for chords, one for a lead and still he got an empty channel to fill.

You can choose between "Effects" (only), "Music" (only) and "Music+" (combination). The ingame-tune fits the game good. Since this is a standard "shoot'em up" game, it isn't so difficult to make a fast beating tune. No melodies here, though I don't think many of us really are expecting one - a nice rhythm with some nice vocoder sounds and a bassline happily following the bassdrums. Here and there a lead bumps in, but generally there are no real melodies. The rest of the tunes are equally the same as the first.

The effects are a bit above the normal standard of a "shoot'em up" game - some speech-samples together with lots of laser-, blasts- and shooting-fxs. It's difficult to find out if the quality is bad or not, but it sounds good.

Overall the music in this game is very good. The intro-titletune is the reason why the music is ranked so high. Hippel is truly one of the best game musicians around.

Get your hands on this game - not for playing of course, but for listening to the incredible title-introtune. It's worth it! 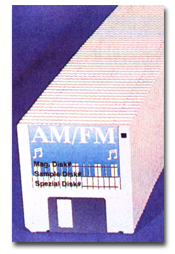