The development history of

When I came to work for Thalion in October 1989, I met a most engaging Swiss programmer there by the name of Chris Jungen. He was a very modest bloke, into Def Leppard and that sort of commercial hard rock. Although he was a very modest chap, he was coding what would definitely be the fastest 3D racing game ever, "No Second Prize". It would be some sort of futuristic (and, not to mention, much faster, smoother and more capably programmed) version of Domark's "Hard Drivin'". The 3D routines would be the fastest ever seen on any machine, and there would be multiple loopings, corkscrews, ramps, chasms and tunnels. It would not only be fast but it would also be ultimately detailed, with complex shapes flying to and fro and that sort of thing. I would be everything that "Hard Drivin'" and "Stunt Car Racer" had been, only much better, faster, smoother, infinitely more playable and with plenty more knobs on.

I proudly showed the first demos on the London PC Show, the Amiga Messe (we ran the demo on an ST under the table!) and the French Salon de la Micro. People drooled and multiple people from the scene said they would get the game as soon as it got out. Time crawled by. Around the summer of 1990, the then Thalion managing director wanted the concept to change. It would have to be some sort of monorailish bobsled thing with well thought out craft design and the whole thing and lots of shooting, too. Even I was involved in the new concept and it was progressing nicely. The demo that had been shown for the last year was still the same, and Chris kept on amazing us with proclamations such as "Well, last evening I again doubled the speed of the vector graphics routines!" We would fantasize of Jez San and other key vector graphics programmers losing control over their lower jaws when gazing at the stuff that was going on on the screen. "No Second Prize" had the best core routines anyone could wish, and Chris enhanced them every month or so. It must have been the rich vitamin drinks we used to buy every day, even though they seemed not to have any effect on me. 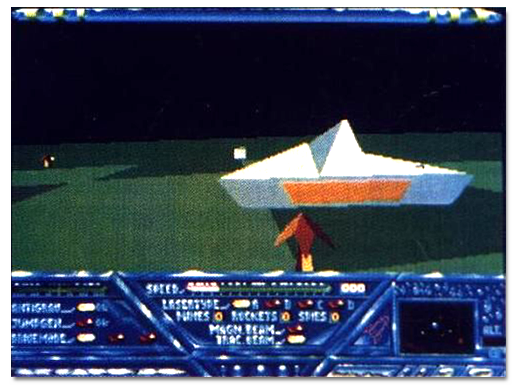 When I left Thalion in March 1991, "No Second Prize" was still not finished. All in all it had taken almost two years so far, and it was supposed to be released 'shortly'. The concept had by that time been altered completely again. It was to be a motor racing game - no, a motor racing simulation - and the spectacular bits featured in the demo (such as the loops and screws and the multiple other on-screen shapes) had already disappeared. Thalion had a new man at the reigns who knew exactly what kind of stuff people wanted. "Simulations," he said, "that is the kind of stuff people will want." The very hottest and absurdly fastest futuristic 3D shooting 'n' racing arcade game had been turned into a rather more realistic and not all too spectacular (yet still very fast) motor racing simulation.

And that's exactly what I got the other day. Mind you, my relationship with the head honchos at Thalion is of such quality that someone had to send me a cracked copy because there was no other way of getting my hands on it. In retrospect I am glad I didn't shell out any money for it. If a motor racing simulation game is to be any good, it will have to look quite a lot like Microprose's "Formula One Grand Prix". It is clear that this has been taken into consideration in the around-the-game design of "No Second Prize". You get circuit overviews with all sorts of data - pretty realistic. You can select tracks and different drivers, and you can do some training or a complete championship season (which you can also load from and save to disk). The simulation element is rock-solid. What about the actual game?

Let's first start with the aesthetical side. The music is good (by Gunnar "Big Alec" Gaubatz) and the graphics are excellent (by Thorsten "Gogo" Mutschall). There are a couple of menus where you can select your driver and the track as well as manual/ automatic gear changes and mouse sensitivity. Yes, the game is totally mouse-controlled, which needs a lot of getting used to when you're used to, say, "Formula One Grand Prix", which is joystick-controlled. Once you have selected all of this (there are twenty tracks; you can practise on any of them or race them all in strict sequence during a championship season) the game really begins. Especially in the beginning it's virtually impossible to control your bike, not even with a mouse sensitivity of "5" which is, it seems, least sensitive. It's almost impossible to even stay on the road. Good thing is that you get 'recentered' each time you wander off the track too far, and you get a warning when you're driving in the wrong direction after a multiple spin. Screen layout is excellent. You get to see what you have to see, as well as your position and that of the opponents (including graphically, on a mini picture of the current circuit), lap time and total time. The 3D graphics are very fast and, on the contrary to those in "Hard Drivin'" in particular, bug-free as far as I could see. No priority difficulties and that sort of thing. Good thing that the corners are indicated by arrow signs, for otherwise you'd surely fly out of the corners each time there is one. Even when you're getting more used to the controls, the game remains very difficult. At start you can overtake a few opponents but before you know it you go off the track. Instinctively you try to get back on it, therewith hypercorrecting. The controls are much too sensitive, and I don't like mouse controls anyway. A nice touch to the game are the cameras. Although it's not possible to select 'no driver' and watch sortof a demo game, you can replay a number of seconds from four different angles (one being behind a helicopter tailing the one in first position) after pausing the game. Of course, having been spoiled rotten by games the likes of "F1GP", I had expected more - but even as it is it's a lot more than many average racing games offer, so that is one of the things that actually makes sure that "No Second Prize" actually isn't one.

What can be concluded? "No Second Prize" is probably one of the smoothest, fastest and most extensive racing simulations, though fiendishly difficult if not virtually impossible to control. I would have preferred an option for joystick movement and, though that's a bit trivial, better camera options. However, I would prefer getting "F1GP" any time. The scenery is better and more elaborate there, and there are lots more opponents without the thing getting too slow. Personally I think it's a shame that the "No Second Prize" you can buy in the shops is not the flashy game that Thalion originally wanted to make, the game that made jaws drop and mouths slaver. Although I think I am not quite impartial enough to give a rating, I will tell you it's 10-3.