[...] I spoke to Erik Simon, the producer of Ambermoon, or, as he describes it, "the guy who kicks the programmers' butts and ensures the game is released on time", to find out exactly how they tend to claim the RPG throne for themselves. [...]

[...] "Believe it or not - you better do, I'm two metres tall - but we have had a bitmap-polygon routine at Thalion for over two years now. As we've been involved in various projects we've not had the opportunity to implement this technique but now the chance has finally arisen. Our revolutionary realtime texture mapping system gives you the possibility to move around freely in three-dimensional dungeons and cities. It really gives you much more of that 'I'm really there' feeling. It thrills us to be doing things on the 16-bit machines that are normally impossible to do." This texture mapping business sounds very interesting, but what's it all about? "Generally speaking, it's the next step in 3D games," pipes Erik. "The development has gone from wireframe to solid polygons and now on to texture mapping. Texture mapping uses the same simple calculations that most polygon games use but instead of taking a simple one-colour polygon, we take a bitmap graphic and distort it spatially so that it fits on the polygon. Many painting programs such as DPaint have been doing this sort of thing for years but the real problem lies with performing it in realtime with dozens of bitplane polygons. This is quite a task because you have to handle every single pixel of the object, instead of using a fast one-colour polygon routine. It's easier to do on the PC than the Amiga, due to the VGA cards [the byte-per-pixel mode], not to speak of the faster CPUs."

Speed is always an important part of a 3D game. No matter how much detail on-screen, if the game trudges along at one frame a day, the illusion of realism is lost completely. The Ambermoon dungeon is drawn using four bit-planes, which give sixteen colours, but the actual game runs in five planes (32 colours). Due to the amount of colours being used Thalion are losing 25% of the optimum speed but they feel that the advantages of having more colours to play with and the ability to smoothly fade objects to black when there is little light in the dungeon more than make up for this. "The average speed of the dungeon section is anything between ten to five frames a second, depending on what's on screen," explains Erik. "There are special routines for turboboards which speed things up on upgraded machines. We're constantly working on optimisation, but I don't think we can make it much faster. If we have the time then maybe we'll offer an option to display textures on the floor and ceiling especially for turbo owners."

An interesting feature of Ambermoon is the way the view changes depending on which character is currently "active". The view from a dwarf is noticeably nearer the ground, making the walls appear far more daunting.

Comparisons are bound to be made between Ambermoon and Legends of Valour but Erik doesn't seem at all worried. "Although I've only seen the Amiga demo version, it failed to impress us here at Thalion, not because of the frame rate, which, to be fair, isn't that much slower than ours, but because our screen window is approximately three times bigger and still faster. We're using the same size screen for the texture mapped dungeon in Ambermoon as we used for the block dungeon in Amberstar which is why our system doesn't tend to 'crumble' distant objects as much as Legends of Valour. Furthermore, we seem to use bigger bitmap blocks so the pixels don't zoom into larger squares as fast. Don't get me wrong, I don't want to criticise the Legends team, they've performed, just like us, pioneering work on the Amiga. With our system, for example, it's impossible to have a 'second' storey like in Legends, at least at the moment. Despite these technical details, you have to bear in mind that our texture mapping system is only one part of Ambermoon."

There aren't any actual sound effects in Ambermoon because they've decided to concentrate more on implementing atmospheric tunes. They are hoping to include between twenty and thirty musical pieces, composed by Berlin music student Matthias Steinwachs (who, interestingly enough, was responsible for the excellent No Second Prize music).

Ideas are constantly floating around, as Erik explains. "We always have many more ideas than we can program or paint but are unable to for one reason or another. It's not a question of the machine's limitations, it's a question of time and that, of course, means money. We're looking enviously to America from time to time. These guys put maybe ten times more manpower and money in their projects because they know that they will sell enough to be in profit at the end of the day. In fact Ambermoon is a project with which we are testing to see wether the Amiga's share is still strong enough to afford the development of high-standard software."

Erik leaves us with an unbiased (?) passing comment. "Ambermoon improves over all the other RPGs because it is the best RPG ever and I want all of you people to buy huge amounts of it," he jokes. "One of the main points in the 'Amber-philosophy' is to use both a complete 2D and 3D system. In our opinion it's a very good way to create a whole fantasy world, instead of having just a complex dungeon system like many other RPGs. It combines the thrill of exploring a huge world in 2D without losing orientation, with the intense, claustrophobic atmosphere of creeping through an eerie, dimly lit dungeon, especially with this new 3D system. Interior furniture and architecture that would be too complicated to be realistically displayed in 3D can be portrayed in 2D instead. We're trying to offer the player two RPG games in one which would be able to stand alone as a game each. We feel that we are the only software house that is capable of doing this because we have the experience of Amberstar and some new development tools. I think Ambermoon will be the most advanced RPG available on the 16-bit machines. I really hate arrogant comments like that, but take a look at the finished game and you'll see."

Way back in February we unveiled Ambermoon to an astounded Amiga audience who began bombarding us with calls and questions regarding the game's release. "Easter." we replied, not knowing the amount of egg would end up on our faces when the game never materialised. It's not our fault, honest - blame Erik Simon, Jurie Horneman and Karsten Köper, three of Ambermoon's design and programming team. They're the ones to ask.

Seeing as though you don't have their phone number, we've decided to do the asking for you. So then, Jurie, just why has Ambermoon taken so long? "After Amberstar was finished, back in February 1992, the entire team sat down together and planned what we'd do in Amberstar 2 (as it was called then)." replies Jurie. "We made a long list of new features and changes and, after having practically redesigned the original game, we said to our manager: 'We'll have it ready by Easter.' And he said: 'Oh, don't hurry - take until August.' Brilliant, we thought - we've got one and a half years, so we happily started working on the most amazing RPG ever. Then the word from above came: 'Er, we thought you meant August 1992, guys! The game's got to be in the shops by Christmas!' So we sat down again and thought of smallish changes (like a real-time texture-mapping dungeon) we could make to the original Amberstar system so it could be ready by Christmas 1992, and set about working on what was then called Amberstar 1.5. When we came to convert Ambermoon from the Atari ST to the Amiga, we found that it had to be virtually rewritten and not just ported across as we'd hoped. The combat screen took longer than expected, the texture-mapped dungeon took longer than expected, changing the editors took longer than expected... but we discovered neat things we could do if we just changed a little bit here and there... Suddenly it was March 1993 and the end of Ambermoon still wasn't in sight. We sat down and tried to estimate how long it was going to take, and this time we said: 'Okay, August 1993. Really. Honestly.' And we will probably make that. Give or take a month."

Erik chips in here with some swearwords: "It seems to me that we didn't fully realise what a bloody huge project we were creating until a few weeks ago when we counted the data. It was weird discovering that we'd managed to create an RPG the size of which you usually see on the PC, programmed by teams five times as large as ours. And on top of that there are all the nagging journos who keep asking us why Ambermoon has taken so long." All this programming has certainly been testing the patience of the Ambermoon team. It must have been a lot harder to program than they anticipated. "Not harder, just longer." offers Jurie. "Mastering the Amiga with its complex operating system and custom hardware took a lot less time and effort than I expected although some of my colleagues, who remember my graceful reaction to the unexplainable bugs caused by incorrect use of the Blitter and what I did to the office doors and walls, may have a different opinion. But what do they know? Looking back, few routines were really hard. However, at the stage where we are now, the programm contains more code than the Atari ST operating system - and that's all hand typed. The seperate parts of an RPG are usually easy to program - it's the sticking it together that's the hard part."

So how has the game changed over the months? "Every part of the game has been redesigned as we went along," continues Jurie, "because it's usually only during the actual programming that you can accurately judge what is possible and what isn't." Has the game turned out pretty much as Jurie originally planned? "No, it's much, much better. We originally planned to do a kind of upgraded version of Amberstar. Now even the game's own mother wouldn't recognise it." Erik is incredibly confident about Ambermoon's credentials. "Unless some monster of an RPG creeps out of a dark cave full of mutated developers, we should be able to beat all known Amiga RPGs in size, technique (dungeons and fighting screens), graphics (170 different walls, over 350 dungeon objects, 25 or more fully animated monsters), sound (over 30 tunes, complexity and playing time). And due to Jurie's efforts to brush up the user interface, it's no crappy marketing blah-blah when I say that RPG newcomers won't have any problems getting into the game." 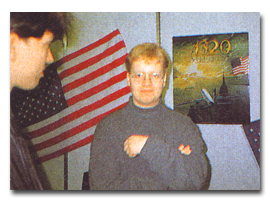